If your fiddle doesn't have any syntax errors, the RUN button will be enabled and allow you to execute the fiddle.

The Fiddle tool does not create a dedicated Fastly service for each fiddle. Instead, the way we execute fiddles depends on whether your fiddle is a VCL or Compute@Edge one.

For VCL, there exists a pool of pre-allocated Fastly services which can be claimed temporarily by individual fiddles when they need to execute. In practice, most fiddles are created, run a couple of times, and then never touched again, so it doesn't make sense for Fastly to create a service for each one.

This is why, when you click RUN, you may see:

Provisioning a Fastly service (exec48) to run this fiddle

Equally, when you make changes to a fiddle's VCL, the service must be recompiled and uploaded to all edge servers. During this process you will see a message similar to:

Fiddle uses real Fastly services that are deployed across our global fleet, so this synchronization latency is indicative of the time required to push a configuration change to a real Fastly service. Typically this takes around 10 seconds, but in edge cases may take up to a minute.

For Compute@Edge fiddles, we use an instrumented instance of our open source local server running in a container to execute your fiddle code. This means there is no deployment delay for C@E fiddles, but the behavior you see is a simulation of the live platform, rather than using the real thing. There is a small per-request overhead to running Compute@Edge fiddles of about 200ms which is not experienced on live services.

Repeated executions of the same VCL fiddle will access the same cache, even if the fiddle is edited between executions. This allows for objects processed by fiddle services to become cached within the Fastly network and be served from cache on a subsequent run.

There are several situations in which a VCL fiddle will start again with an empty cache:

IMPORTANT: All fiddle instrumentation data is delivered asynchronously and reassembled by the Fiddle tool before being rendered in the correct order. The initial set of result data is therefore often incomplete. Allow a few seconds for all events generated by your execution session to be collected and assembled into the report.

The first and last blocks in the result panel (for each request) will always be the 'client' request to Fastly and the response from Fastly.

These blocks include the request and response status lines and any HTTP headers sent or received.

'Origin' requests, that is, requests from Fastly to origin servers, show the request and response header blocks together, along with the resolved IP address of the destination host.

HINT: In VCL fiddles, headers that you mention in your code using req.http.* syntax will be highlighted in any header blocks, since these headers are likely to be of interest to you.

For each VCL subroutine (vcl_recv, vcl_hit, vcl_miss, vcl_pass, vcl_fetch, vcl_error, vcl_deliver and vcl_log) invoked during request processing, a VCL flow event will be logged by Fiddle. You will see a block describing the state of the request at the end of that subroutine and any difference from the value at the start.

All the data reported in VCL flow events is accessible for use in test expressions. For example, the "status: 200" shown in the example above could be asserted using events.where(fnName=fetch).status is 200.

In Compute@Edge fiddles, events will be logged when the compute instance starts and terminates, and also for any host calls made by your code. Host calls happen when your code invokes a feature that exists outside the program's container, and includes:

Compute@Edge events have a similar structure to VCL events, but do not have server-identity information because C@E fiddles do not run on the Fastly platform.

Any log output generated by your fiddle code will be included in the report at the point that it was generated. In VCL fiddles, content emitted using the log statement will be captured and displayed, and will be attached to the VCL subroutine in which that log statement was executed.

In Compute@Edge fiddles, log output (whether to named log endpoints or STDIO) will be displayed as separate standalone events.

Sequential log lines that are sent to the same log destination will be combined and displayed as part of the same log event in the Fiddle UI.

If Enable WAF is selected in request options for a VCL fiddle, Fastly's legacy Web Application Firewall is available to your fiddle service. It can be manually invoked, and if it is not, Fiddle will invoke it automatically at the end of vcl_miss and vcl_pass.

If WAF is executed on a request, its report will be attached to the bottom of the relevant subroutine event: 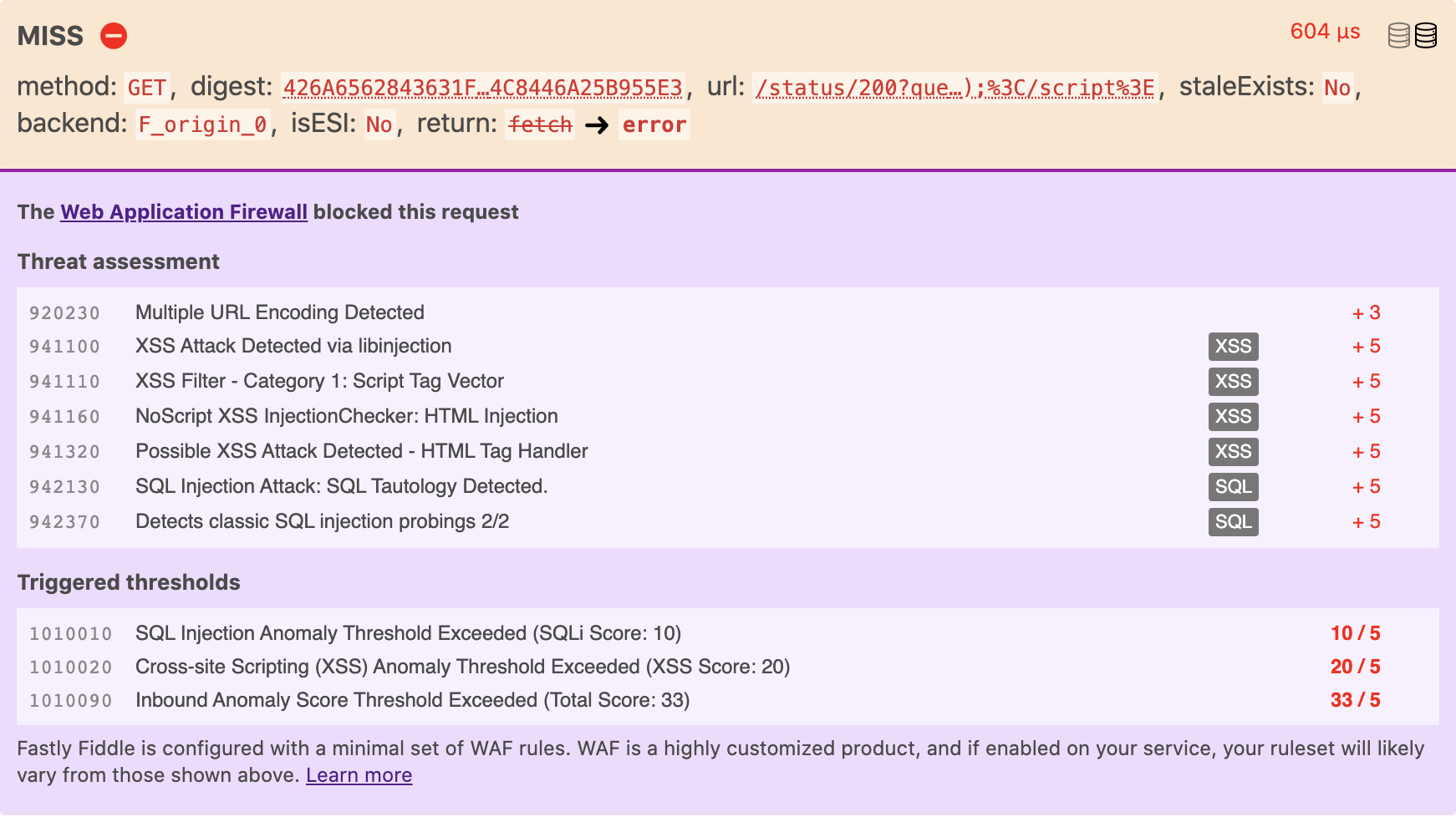 There are three types of WAF rules: blocking rules, scoring rules, and threshold rules. Blocking rules look for patterns in the request and immediately trigger the WAF if they are found. Scoring rules also look for patterns, but when the pattern is found, the rule contributes a number of points to an accumulating total score rather than immediately triggering the WAF. The threshold rules define point values at which the WAF should be triggered if enough points have been accumulated by scoring rules.

Fiddle's WAF does not have any blocking rules enabled, but does have a range of scoring and threshold rules from the OWASP standard rule set.

Scoring rules matched by a request are shown under Threat assessment. Scoring rules contribute their points to a category of threat, as well as to an overall score. Either the category, or the overall score, can trigger a threshold.

If Enable shielding is selected in request options and a request is to be sent to the backend, that request will instead be transferred to the shield POP where it will go through the VCL again. This will show up in the report as a nested VCL flow sequence. For example, if a request is a cache miss on the edge and then a hit at the shield, the report may show:

While this is the 'logical' sequence, in practice the vcl_log subroutine is executed after the response has been sent; so, in the case of the nested shield flow, the LOG event is not in the critical path. However, most likely it will have executed by the time the response from the shield arrives at the edge to trigger the next VCL event at the edge, so Fiddle will always show the LOG event immediately after the associated DELIVER event.

Shielding is not supported in Compute@Edge fiddles.

In some cases, Fastly will execute more than one VCL flow or compute instance for a single fiddle execution. This can happen for a few different reasons: